Blandine 8 PM
A talented singer, composer and dancer, Blandine blends traditional and popular sounds from the Congo with afrobeats, R&B, jazz and pop. Having worked as a vocalist for highly-renowned artists such as Mbilia Bel, Afrisa International, Awilo Longomba, Quartier Latin, Simply the Best, Natalie Makoma, Mélanie Durrant and Donne Roberts, Blandinehas released a number of singles under her own name. The latest Rockyna, is a return to her rumba roots and a collaboration with Congolese veteran musicians, Nyboma Kanta and Lokassa Ya Mbongo.

Born in the Democratic Republic of Congo and raised in Lome, Togo, Blandine developed a passion for singing at an early age and was exposed to a variety of music from Africa, Europe and America. She apprenticed with jazz and classical choirs and in Canada studied at York University. She has performed at major festivals in Ontario, Quebec, New York, Colombia, Europe and Africa.

Fatoumata Kouyaté and Mabinty Sylla 9 PM
Descended from a long line of griots, Fatoumata Kouyaté is a balafonist, singer, percussionist, founder of Groupe Djéliguinet et ses Enfants, member of the National Theatre Troupe of Guinea and Amazones Women Drummers. The balafon is sacred Guinea tradition and traditionally only played by men. The first was made by the King of Susu (former African empire in the 11th century) and was given to the griot Balafaseke Kouyaté. The Kouyatés have been an important family of storytellers through the generations. Fatoumata is a direct descendant and one of the first African women to play the balafon, breaking an age-old taboo of the Manding Empire.

Born in Guinea, Mabinty Sylla is a professional dancer, choreographer and instructor of West African traditional dance. She began her dance training in Conakry with Mamadouba Camara, the first soloist for the Ballet Djoliba and former soloist for the Ballet Africains; two of West Africa’s most respected traditional groups. She also studied and performed with Ballet Tayeli before moving to Toronto in 2008. Mabinty has performed in many festivals and cities across Canada and teaches dance in schools, community programmes and private workshops for individual and groups in the city. 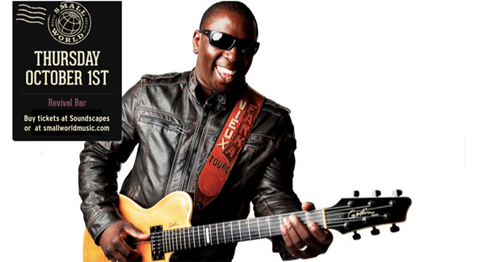