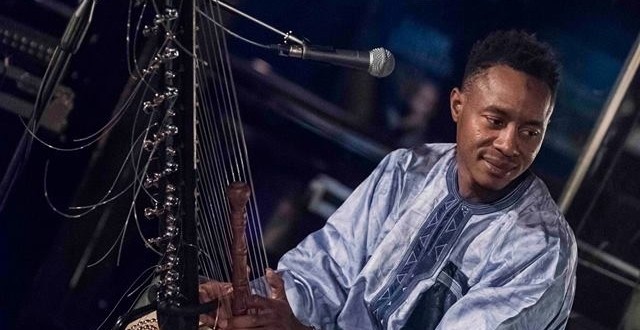 Batuki Music Society and the Alliance Francaise de Toronto are proud to present
Malian kora master Diely Mori Tounkara on Saturday February 11 th at the Alliance
Francaise Theatre located at 24 Spadina Road at 9 pm.
Born into a large family of Malian griots, Diely Mori Tounkara followed in the
footsteps of his musician father by becoming an undisputed master of the kora.
Thanks to his father, a revered kora player, he learned not only how to play the
instrument, but also learned a wide repertoire of traditional Mandingo pieces. He
learned to play guitar, following the teachings of his brother, Djeli Mady Tounkara,
the internationally acclaimed guitarist and soloist for the legendary Super Rail-Band
of Bamako. For many years, he also benefited from the teachings of Toumani
Kouyaté in kora and Daouda Fall Diagne in sabar drums, a traditional percussion of
West Africa.
Diely Mori is a versatile multi-instrumentalist, always looking to expand the range of
his kora. His apprenticeship and his knowledge of traditional instruments and music
are at the service of the greatest in Mali and Senegal, including the Super Rail Band,
Kerfala Kante, Mangala Camara, Saramba Kouyaté and Yaye Kanouté. He composes
his own music and, combined with the classical pieces of Mandingo culture,
succeeded in a rich and original fusion, a beautiful mixture of the deepest traditions
with a more contemporary personal repertoire.
In 2007, he settled in Montreal and is a member of the Kabakuwo collective, winner
of the Syli D`or world music award in 2010, and whose first album, Malongtin, was
released in 2011. He is also among the 17 Montréal diversity artists selected for the
Creation of the album Arometis, a project of Vision Diversity. Today, in addition to
his professional career, he shares his musical heritage with a new generation,
teaching young Quebecers the techniques of playing the kora, guitar and sabar drums.

Happy Holidays to all! We look forward to your continuing support in the New Year. (click on image ^ to view larger)