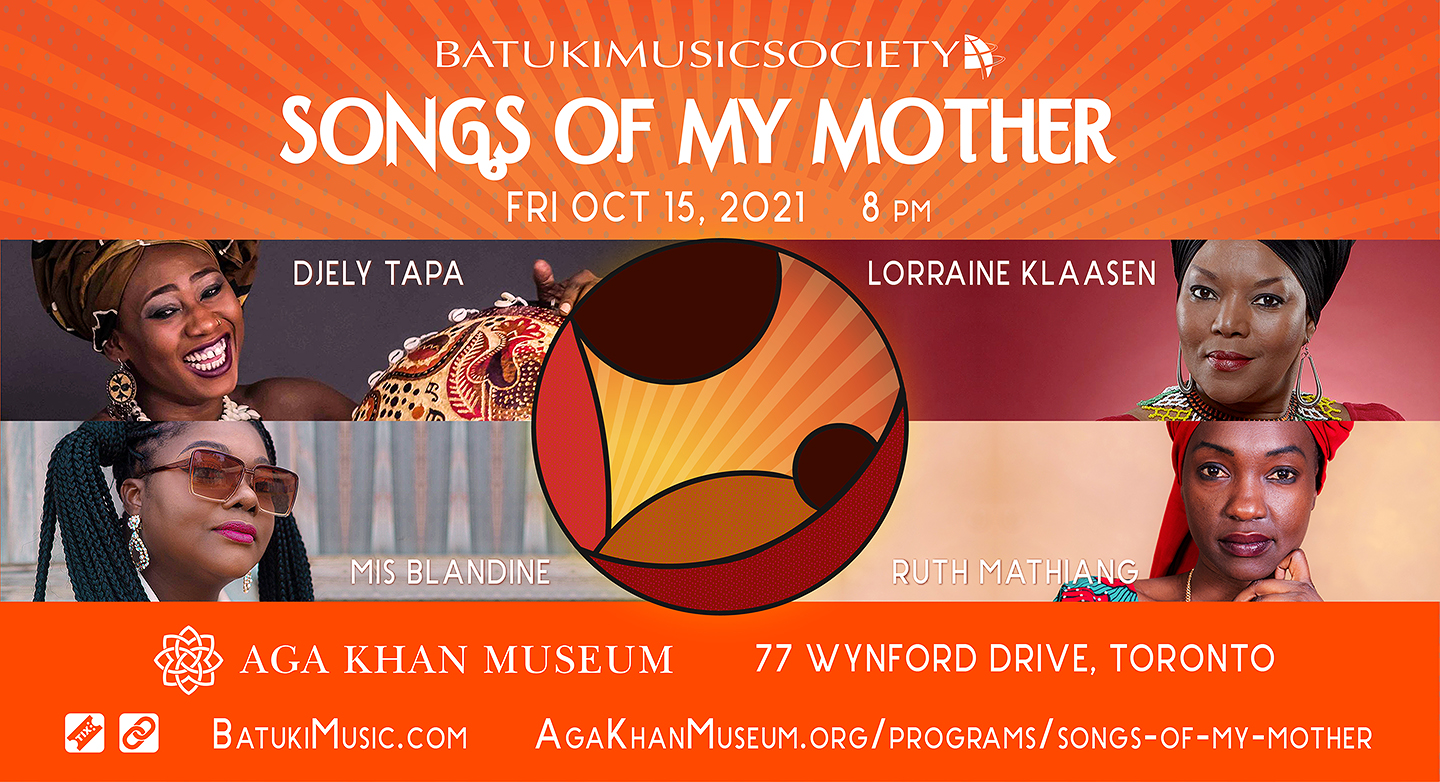 NOTE: Guests ages 12 and up will be required to show proof of full vaccination against COVID-19, along with ID, to attend this event. Go here for more information about the Museum’s proof of vaccination policy.

Four electrifying vocalists with roots on the African continent will honour the role of women and mothers in carrying on musical traditions in a one-time-only concert at the Aga Khan Museum.

Co-produced and curated by Batuki Music Society, Songs of My Mother will showcase diverse stories and musical styles from different regions of sub-Saharan Africa and beyond. Featured will be two JUNO Award winners, South African-born Lorraine Klassen and Mali-born Djeli Tapa Diarra. Also on the all-star bill for October 15 are Mis Blandine, a mesmerizing singer-songwriter originally from the Democratic Republic of Congo, and South Sudan-born performer Ruth Mathiang, whose pulsating sound mixes traditional African music with hip-hop, Afrobeat, and reggae.
This presentation shines a light on female singers and their significance in African customs, rituals, and ceremonies. The first words or language that a child hears from their mother are often shared in song. This introduction to sound and words through song is a very common element in the bonding process between a mother and her newborn in most African cultures. Though singing is not solely done by women in most African societies, it is true that the female voice is ever present and yet is not given a prominent role that it deserves. Women are often relegated to the background and discouraged from assuming leading roles, especially as bandleaders.
More than just an unforgettable evening of music and storytelling, Songs of My Mother aims to inspire mothers, daughters, grandmothers, sisters, and aunts to stand together and celebrate themselves as major contributors to the arts and the community.

Lorraine Klaasen, the daughter of legendary South African Jazz singer Thandie Klaasen, is one of the few South African artists who have preserved the classic sound of “Township Music,” which continues to be the most distinctive sound to come out of South Africa. Born and raised in Soweto, Lorraine has electrified audiences worldwide with her stage presence and showmanship. Her album A Tribute to Miriam Makeba, which won Lorraine the 2013 JUNO Award for World Music Album of the Year, is a tribute to the legendary songstress, who remains the most important female vocalist to emerge out of South Africa. Lorraine’s latest album, Nouvelle Journée, showcases some of the musical styles that Lorraine had not yet recorded in her long musical career.

Diarra Sountougoumba, known as Tapa, was born in Kayes, Mali and is a descendant from a long line of griots. She is blessed with the voice of her griot mother Kandia Kouyate, a legendary Manding singer, and the talents of her Bambara griot father, Bouya Diarra, one of the great traditional dancers of West Africa. Based in Montréal, Tapa has performed across Canada, Europe, and Africa. She recently released her debut album, Barokan, winner of the 2020 JUNO Award for World Music Album of the Year.

Born in the Democratic Republic of Congo and raised in Lome, Togo, Blandine developed a passion for singing at an early age and was exposed to a variety of music from Africa, Europe and America. She apprenticed with jazz and classical choirs and in Canada studied at York University. A talented singer, composer, and dancer, Blandine blends traditional and popular sounds from her Congolese heritage with Afrobeat, R&B, jazz, and pop. Blandine has released a number of singles and her debut album, 2019’s L’Antidote, and has performed at major festivals in Ontario, Quebec, United States, Colombia, Europe, and Africa.

Ruth Mathiang has quickly become one of the rising stars of African music in Toronto. She comes from a musical family, where both her parents were musicians in their youth. She started her musical career in Kenya performing at social functions and local clubs. Mathiang honed her singing and composing skills by performing with local musicians and adopting various styles from traditional music, gospel, Afropop, and hip-hop. She recorded her first album, My Cry Peace, in Prince Edward Island, depicting her difficult life growing up in war-ravaged Southern Sudan. Since moving to Toronto she has performed at several festivals such as Harbourfront Centre’s Hot & Spicy Festival, Afrofest, Habari Africa, and Bana y’Afrique. 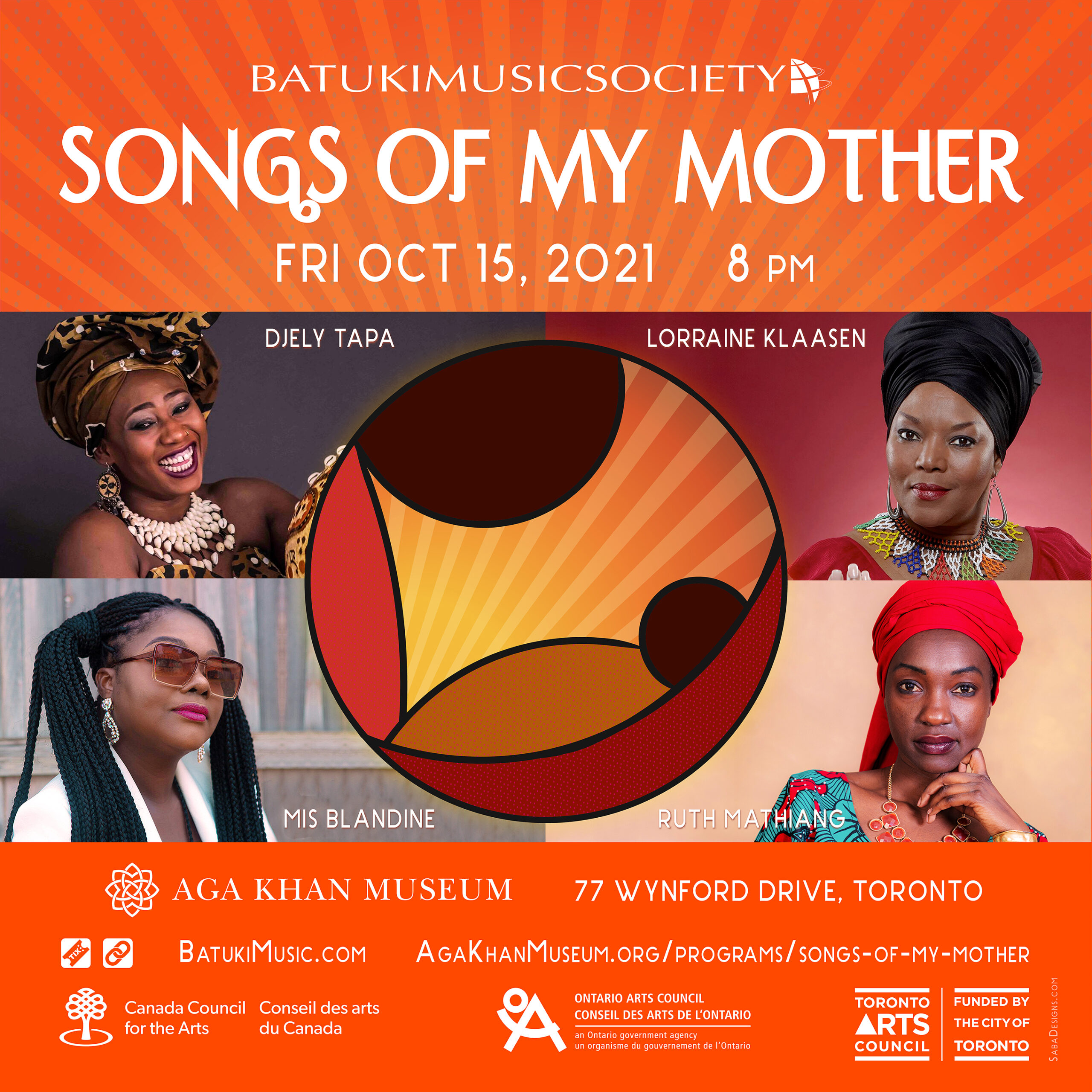