Carine is a singer/songwriter whose interest in music began at an early age in Benin. Her music encompasses Afro-pop, jazz, hip-hop, gospel and some forms of traditional music. Carine is a vibrant voice and innovative performer in the African music scene in Montreal.

Njacko Backo is a multi-instrumentalist, composer, author, educator and choreographer from Cameroon. He has a lifetime of practice in capturing the subtlety of dance and storytelling with his music – an essential part of the African performing arts. His programmes for children and youth draw on parallels and differences between Canadian and African family life.

PREVIOUSLY IN THIS SERIES... BELOW

Blandine is a singer and songwriter from the Democratic Republic of Congo. Her music encompasses traditional Congolese rumba, soukous, mutuashi, jazz and Afrobeat.

Aicha Sylla is a songwriter, composer, singer and choreographer of Malian origin born in the Republic of Guinea Conakry. She's the daughter of the late Mamadou Sylla and the late Hadja Daloba Diakité. While in Africa, she began her career as a dancer-choreographer of Ballet Soleil D'Afrique and Africa Style de Guinea. She then toured Europe and North America with Guinean artist Alpha Yaya Diallo. Since then, she's embarked on her solo career as a singer. She now performs at many events in Montreal including many festivals, concerts and ceremonies. She's a dynamic extroverted artist who livens up audiences with her performances.

Laetitia Zonzambé-YAGNIMÉ uses her gifted and colourful voice to express universal human emotions. “There are no borders for those feelings,” she says. Born in Bangui, the capital and the largest city in the Central African Republic, Laetitia experienced deeply how the world can be at the same time very open, a place where a common humanity is shared, and also very closed – when borders, ideas and bad behaviors hurt people. After a time in France, Laetitia began her musical career back in Bangui, deliberately choosing to sing in the midst of upheaval and social crisis. Working with experienced musicians, she mixed traditional rhythms and sounds with pop, jazz, and R&B. In the process of touring that music, she had new-found appreciation for the extraordinary musical wealth of her country, and incorporated that into her music. Today, living in Montreal, she continues to make her music with local and international artists, singing her songs in French, English, Sango and other central African dialects.

Lyricist, composer, singer, oud and banjo player and percussionist, Hassan El Hadi is a man of many talents. He’s a native of Marrakesh, where the great diversity of Moroccan music comes together. As Yves Bernard, Le Devoir writes, Hassan is also among the few artists from elsewhere “who blow hardest on Quebec tradition, allowing himself to improvise on old popular tunes and to get the iconic ‘la Bolduc’ swinging in French and in Arabic. To all this, he adds jazz harmonies, Berber rhythms, and the subtlety of Arab and Andalusian musical styles. In his genre, he is a unique case.” Accompanied by several artists of various origins: Celtic, Quebec, African and Spanish, El Hadi pushes the exploration further, blending the sounds of Celtic music and Quebecois foot tapping with that of Berber music and Moroccan kaada. Together, they blend and dialogue between the Arab-Andalusian, Celtic and Quebecois cultures to produce an original and festive musical style that finds its source in the infinite and diverse influences of the Maghreb, North Africa and the Celtic countries.

Naxx Bitota is a singer and songwriter, whose musical repertoire includes folkloric, traditional, gospel and popular music of the Democratic Republic of Congo. Though she is influenced by the music of her country of origin, and especially the Mutuashi sounds of the Kasai region, she shows through her compositions her passion for different rhythms of Africa.

Adam Solomon "The Professor", as he is known in musical circles, is highly respected as a lead guitarist, composer and singer. He creates a unique sound that combines traditional African blues and jazz, spiced with East African rhythms. He sings in English, Swahili, and Mijikenda (the Nine Tribes from Mombasa on the Kenyan coast). Adam has been working on reviving the classic sounds of the legends of popular East African music, as an homage, as well as incorporating the traditional acoustic rhythms of his people.

Born in Senegal to a family of musicians, story tellers, historians, singers and dancers, collectively known as griots, Sadio Sissokho’s roots are richly embedded in the Mandingue culture. Born in Mali to a large family of griots, Diely Mori Tounkara followed in the footsteps of his musician father by becoming an undisputed master of the kora. This special Black History Month presentation, La Kora des Griots unites these two masters around the majestic kora instrument to create a sound that contains Africa’s story of yesterday, today and tomorrow, a captivating expression of griot wisdom.

Seydina Ndiaye, a truly extraordinary Senegalese artist living in Canada since 2014. In this intimate acoustic performance, his compositions are refined by talented guitarist, Assane Seck. His ultimate goal is raising awareness to address themes such as peace, sharing, family and love.

Kizaba is an Afro-Electro Congolese artist based in Montreal, Canada. Singing in Lingala, French and Kikongo, his group seeks to infuse contemporary afrobeats, electro, house and music with melodies and rhythms from Congolese traditions, creating a unique Afro-futuristic universe inspired strongly from the stylistic tradition of "Sapologie". 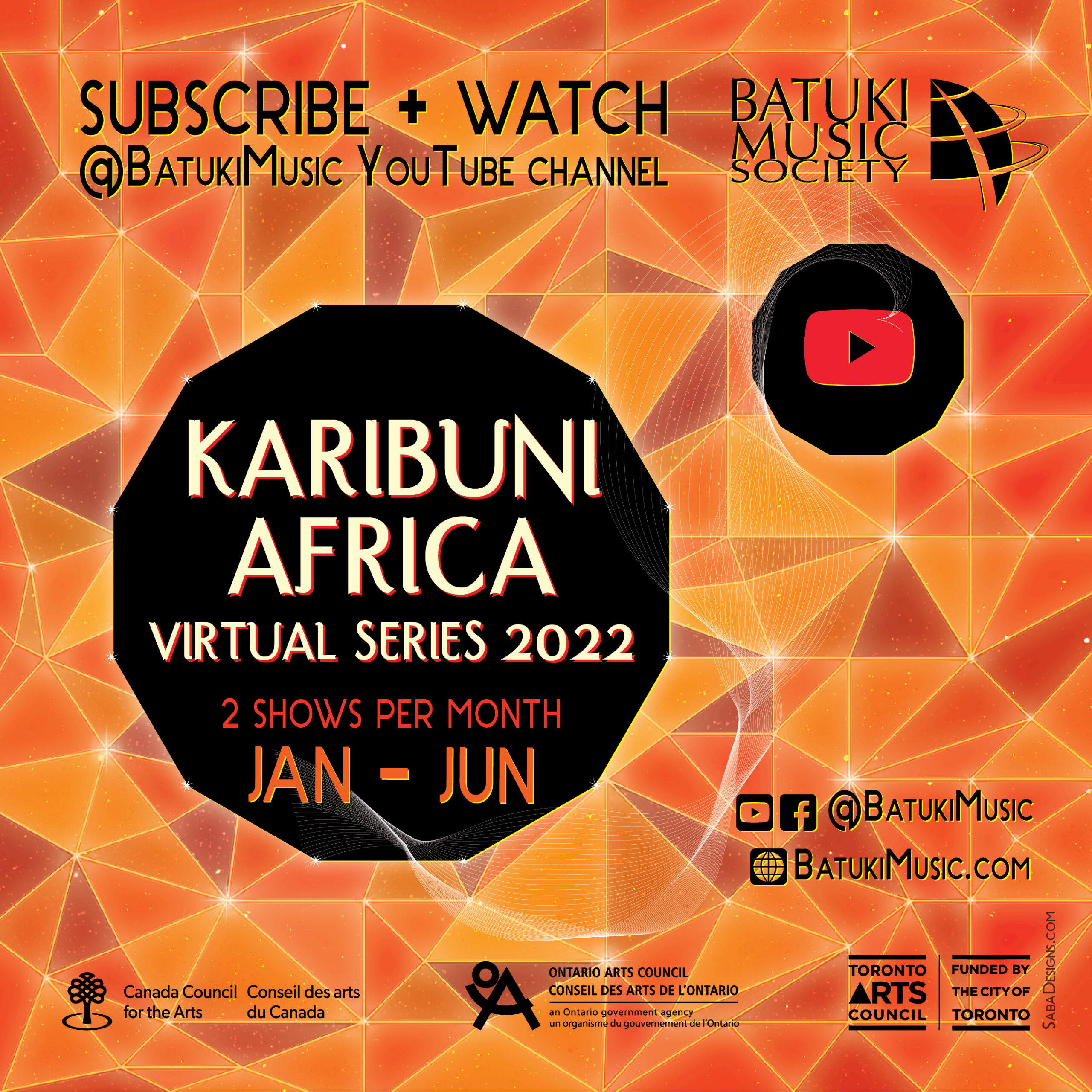 Many thanks to the sponsors of this event